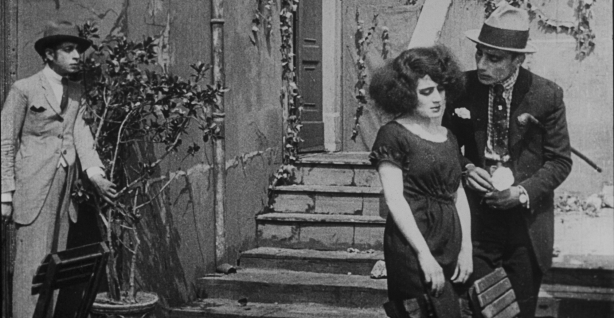 From last Sunday until Tuesday the Eye Filmmuseum was seized by the participants of the 10th Women and the Silent Screen Conference. The goal of this biennial gathering, with speakers from all corners of the world, is to expand knowledge of the involvement of women during the first decades of film history. One of the forgotten female film pioneers that was presented on the conference was the first female Italian filmmaker, Elvira Notari, of who it is said to have been a forerunner of neorealism.

Having seen her extraordinarily beautiful Neapolitan films accompanied with live music at the Cinema Ritrovato festival in Bologna last year, I was curious to hear more about this mysterious figure who founded her own film studio as early as from 1906. But first, let me tell you some more about the conference.

Women’s disguised contribution
Women’s roles in the film industry are often unnoticed, neglected or forgotten in the writings of film history and in our common knowledge, while according to the American Film Institute the silent film period is “an era in which more women held positions of power than at any other time in the U.S. motion picture industry”. For example, some theories argue that women represented 50% of writers in the silent film era. For several reasons, film institutes’ databases often do not give a correct account of the division of industry roles. Much work still has to be done to dig up all the facts from the past to discover the real female contribution to film art in those first decades.

The work of Elvira Notari is to be considered one of these long hidden treasures of film history. There are hardly any photos left of her, and she is still almost unknown in Italy, while for a long time she run one of the most successful film companies in southern Italy, which produced more than sixty feature films and about a hundred short films and documentaries.

Daniela Currò, head curator of the Cineteca Nazionale in Rome, explained to us the many ways in which Notari’s films were exceptional, among other things in the way that they depicted women. As is often the case with the silents, there are only a few surviving films of Notari’s legacy. The five titles which the Cineteca holds in their collection have recently been digitalized.

A family-run company
Dora Film was a family-run company, named after Notari’s daughter. Notari founded it in Naples with her husband, but she did almost everything herself. While her husband was the cameraman, she directed, produced and wrote films, and also acted in them. Their son Eduardo acted in many of the films as well.

The films took place in common environments in the city of Naples or in small villages around it, showing a mixture of fictional documentary and images, not hesitating to show poor people and neighborhoods, and they had intertitles in dialect. In that way popular audiences could identify themselves with the films. Dora Film made films for the many Italian immigrants in the US, who commissioned Notari to make a film about their own village or region.

Another factor of success was the fact that the films often revolved around popular songs, in which desire, love and revenge where important themes. The accompanying singer had to make sure his performance was lip sync with the actor on the screen. In this way you could say that these were a sort of video clips avant la lettre.

One of the things that struck me in the films, besides the vivid realism and intense emotions, was the style and the beautiful coloring. As Currò mentioned, she added a lot of optical effects such as superimpositions and masking, and ingenious title cards. Notari started her career as a film colorer and continued to use coloring quite long, until the late twenties.

No femmes fatales
A striking aspect in which Notari truly represents sisterhood, is the way women are portrayed in her films. They don’t fit in either of the binary stereotypes so often depicted in Italian films, the ‘femme fatale’ or the Madonna-figure. The female protagonists are neither good or bad, but average women who could be your sister, and often are inclined to independence, even ‘protofeminists’, as Currò concluded. In the feature È piccerella, which you can see on YouTube with accompanying music, the protagonist Margaretella is one of those girls who ‘just wanna have fun’, as the eighties song goes.

Currò summed up the success factors, namely the use of dialect in the intertitles, the showing of popular areas and poverty and the depiction of strong women as the three main success factors. Those were also the factors due to which the films were no longer tolerated by the fascist regime and in 1930, Dora Film was shut down. Notari moved to a village near Salerno, where she died in 1946. In the last decades her work has gained more attention and even books been written about it, one with the poetic title Streetwalking on a Ruined Map, by Giuliana Bruno and more recently Il cinema in penombra di Elvira Notari, by Chiara Ricci. In the Italian cinema canon, between directors such as Bertolucci, Visconti and Fellini, la Notari definitely deserves a place.

With thanks to the wonderful blog Silents, Please! for the picture of L’Italia s’e desta.

2 gedachten over “Women and the Silent Screen: Elvira Notari”